A Celebration of Kathleen Ferrier

Building upon the critical acclaim and overwhelming audience response to the show during the Centenary year of Ferrier’s birth in 2012, A Celebration of Kathleen Ferrier is now being launched to a wider audience.

Ferrier’s was a voice of a generation, a voice that entered the national consciousness and was heard on radios and records in almost every household in the country. Her tragic death in 1953 almost overshadowed the Queen’s Coronation. Many people know Kathleen Ferrier’s voice without knowing the tragic but uplifting and courageous story that lies behind one of the greatest British singers of all time. This is a moving tribute to an extraordinary artist.

A Celebration of Kathleen Ferrier intimately tells the story of her life through her own words and those of the people closest to her. It is a multi-media show, which weaves extracts from letters and diaries, reminiscences and anecdotes with wit, warmth and genuine audience engagement. The narration is punctuated by performances of the music most associated with one of the world’s most remarkable voices and the choice reflects Ferrier's versatility - from folk to opera and from oratorio to song.

Alongside music and theatre, the performance is illustrated throughout with a Powerpoint presentation presentation of rare photos, supplied by the Kathleen Ferrier Society archive, giving a further visual insight into the ‘person behind the voice’. The Society highly recommend the show and also offer to supply an exhibition to venues, tailored to the region performed in, with further archive material which can be viewed by the audience before and after the show, and during the interval.

The show’s creator, Diana Moore, enjoys a highly acclaimed international career of her own. Recent reviews have praised her for her ‘emotional depth’ The Guardian, ‘thrilling technical bravura’ Gramophone, and ‘rich, evocative sound’ San Francisco Chronicle.

The show can be tailored to either a 2 or 3 person format, and can be adapted to almost any venue. In the 2 person show, the narration is split between Diana and her accompanist - this has included renowned pianists John Reid, Christopher Glynn & Joseph Middleton. In the 3 person format, the pair are joined by celebrated BBC broadcaster and founder member of the Kings Singers, Brian Kay, with whom Diana has collaborated to develop the script.

How the show came about

Ferrier’s singing voice is the first I remember being able to distinguish on the radio or on record. I first heard it at quite a young age, at the house of a family friend, who played me her records. She spoke with such reverence about occasions where she had sung in the Bach Choir when Kathleen was singing solo, occasions over half a century previous. It was clear that this was a personality and voice who had had a profound effect upon those who heard her. Her voice had a very ‘human’ quality and a natural honesty that I found impossible not to respond to. She is certainly an artist who has inspired and influenced me as a performer, despite the fact she died 20 years before I was born and I’ve only heard her voice on recordings!

I was inspired to write the show after going to an evening devised by Prunella Scales about the life and letters of Queen Victoria. The performance seemed to be such a fitting tribute to a figure that she so obviously respected and was intrigued by, and I was very moved. I was slightly apprehensive about putting this together because to capture Ferrier in the same way that Prunella Scales captured Victoria wouldn't work, for a variety of reasons. To capture that voice and personality in one would be simply impossible - recordings and living memory thankfully exist to do that job. And the idea of some kind of ‘tribute act’ seemed complete anathema to me! Moreover, music performance styles have changed dramatically since her day, particularly with the advent of the Early Music revolution and developments within music history.

So, what I have aimed for is to put together a show celebrating her life through her letters, diaries and the personal accounts of those who knew her well, mixed with performances of some of the music that was associated with her, and illustrated with rare photos from the Kathleen Ferrier Society archive, as my personal tribute. 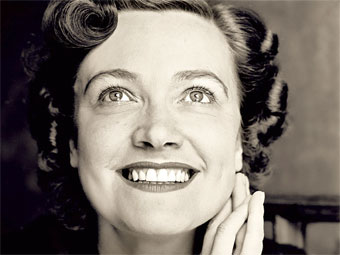 There was silence. The pause that every Festival Director wants – that moment of quiet at the end of a performance when the audience has been so moved that it has to gather itself together before bursting into applause.

Diana’s voice has such a glorious quality, with a depth and beauty of the same kind that made Ferrier so irresistibly special. The story of Kathleen’s life which she has put together, together with so many of the songs which Ferrier made very much her own, creates an evening of sheer delight and pure nostalgia, affectionately reminding us of one of the world's greatest singers.